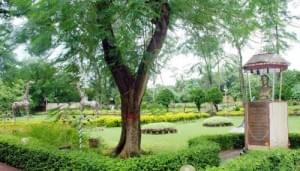 Gallery
Home explore from - to - Barrackpore

Barrackpore Barrackpore is a city of West Bengal & a close neighbor of Kolkata, was the first cantonment set up by the British & later spread their rules in India.

This is also the place where the spark to get rid of the Britishers was lit.

A visit to Barrackpore will let you enjoy the calm nature away from the hustle of the busy city life. The name Barrackpore came from the English word ‘Barracks’. The name is because it was the first cantonment of British East India Company.

You can visit Mangal Pandey park which is built in honor of Mangal Pandey who was the first nationalist dared to stand tall against British oppression. Unfortunately, he was hanged by the Britishers on 8th April, 1857 here. The tree is still here where he was hanged. There is also a statue there in memory of him.

You can also visit Annapurna Mandir which is the replica of the Dakshineswar Kali Temple, Gandhi Ghat which comprises of a lot of murals which depicts the works of Mahatma Gandhi & some of his ashes after his death is also spread here, Nishan Ghat which was built by the Britishers for the usage of their Governor-General & his guests, Dhobi Ghat which was built for the dhobis to wash the clothes, Barrackpore Cantonment where you can find some remaining of the remaining warehouses of the oldest cantonment in India, Gandhi Museum where you can get to know about Mahatma Gandhi more closely.

You can also enjoy paddle boating in the Hooghly River or enjoy a picnic with your friends or family by the riverside.

The nearest point of Belgharia Expressway, which becomes National Highway 6 (NH6) is just 10 kilometers away from Barrackpore.