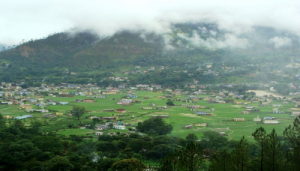 Gallery
Home explore from - to - Bageshwar

Bageshwar is a city and a municipal board in Bageshwar district in the state of Uttarakhand, India. It is also the administrative headquarters of Bageshwar district. The town is situated on the confluence of Gomti and Sarju river which is a tributary of Sharda or Kali river and joins Kali at Pancheswar.
This Sarju river is the same, which is known as Sharda till it meets Ghaghra /Sarayu river on whose bank Ayodhya is situated.

The name has been derived from "Byaghreshwar". 'Byaghra' is tiger and 'Ishwar' is God. Therefore the name would mean Tiger God, i.e., Lord Shiva.

The nearest airport is at Pantnagar, 180 km away to the south in Nainital district , nearest railhead is Kathgodam, 160 km away. Tanakpur 230 km ( away to south-southeast near the border with Nepal is another railhead.