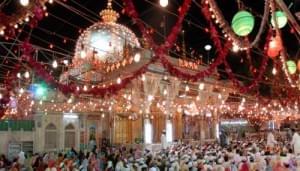 Gallery
Home explore from - to - Ajmer

South west of Jaipur, Ajmer is an oasis wrapped in the green hills. The city was founded by Raja Ajay Pal Chauhan in the 7th Century A.D. and continued to be a major centre of the Chauhan power till 1193 A.D.

Ajmer is a popular pilgrimage centre for the Hindus as well as Muslims, a popular religious place in Rajasthan, where people from all faiths like to come. Ajmer Shareef (Tomb of Khwaja Moinuddin Chishti) gave Ajmer the status of being a place that fulfills their wishes. Thus, the Dargah is often crowded, however it is not the only place that you will see foreign tourists thronging in Ajmer, Nasiyan Temple, Foy Lake, Adhai din ka Jhopra, Taragarh Fort and Ana Sagar Lake also recieves a large number of international visitors every day.

It is a centre of culture and education, the British chose Ajmer for its prestigious Mayo College a school exclusively for Indian nobility.

Shopping in Ajmer Rajasthan is a pleasurable experience. Ajmer is known for antiques, ornaments, charming gold and silver jewelry in modern designs, bandhini (colorful tie-and-dye sarees) and overstated jodhpuri 'Jutis' (shoes). Ittar, a special form of local scent is sold in small and large packs all over Ajmer Rajasthan and is a specialty that one can take home from Ajmer Rajasthan.

Although Ajmer is a year-round destination, the time period between October and March can be considered as the best time to visit this place.