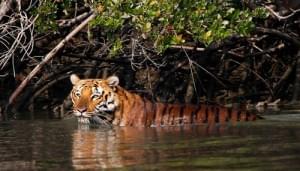 Gallery
Home explore from - to - Sunderban

Sunderbans is what makes West Bengal eligible for praises. Being world’s largest delta and also the largest Mangrove Forest, Sunderban is on the bucketlist of many travel aficionados around the world. Sunderban is a unique ecosystem dominated by mangrove forests and gets its name from the Sundari trees. Sunderban is spread over 54 islands and two countries. It is one of the last preserves of the Bengal tiger and the site of a tiger preservation project. Sundarban is bounded by River Muriganga on the west and Harinbhahga and Raimangal Rivers in the east. It is the biosphere reserve that has received the recognition of UNESCO under its Man and Biosphere (MAB) Programme in November 2001. Sundarban National Park, forming the core area of Sundarban Tiger Reserve has also received recognition as World Heritage Site by UNESCO in 1987. It is to be noted that Sundarban Tiger Reserve has the highest tiger population in the world.

Sunderbans is open to visitors from October to March. Winter is anyway the time when the area isn’t as hot and humid as the rest of the year, so it’s best to time your visit for between December and February.