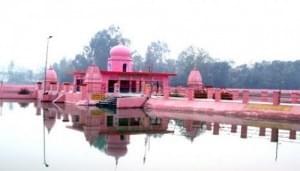 Gallery
Home explore from - to - Saharanpur

Saharanpur city grew in a region named after a Sufi Saint Shah Haroon Chishti. It was founded by Sah Ranbirsingh, a Jain nobleman who was the Mughal treasurer ,he laid the foundations of the present day city on the site of an army cantonment.

Situated close to the borders of Haryana and Uttrakhand states, the city is surrounded by a fertile agricultural region that produces plentiful grains and fruits.Saharanpur is known for its wood carving cottage industry as well as a thriving market for local agricultural produce, including basmati rice and mangoes.

Saharanpur is similar to other cities in western Uttar Pradesh in language, dress, culinary habits, festivals, and other traditions and ceremonial functions.