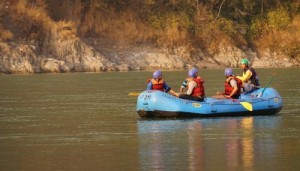 Gallery
Home explore from - to - Rishikesh

Hrishikesh is a name of Vishnu that means 'lord of the senses'. The root words Hrishika and Isha join together to make Hrishikesha. Hrishika means Senses and Isha means Master or Lord. Hence the word means Lord of Senses or Lord Vishnu. The place gets its name after Lord Vishnu who appeared to 'Raibhya Rishi', as a result of his tapasya (austerities), as Lord Hrishikesha.

Legend says that fierce fire broke out here. Lord Shiva was angry with Lord Agni and cursed him. Then Lord Agni prayed here for the expiation of his sins. Hence it is also known as 'Agni Tirtha'.As with Haridwar about an hour south, Rishikesh is considered by Hindus to be a holy city and is vegetarian by law.

Meat and alcohol are not served within the city.Cows roam freely in the streets and always have the right of way if they stop traffic.

The sacred river Ganges flows through Rishikesh. It is here that the river leaves the Shivalik mountains in the Himalayas and flows out into the plains of northern India. Several temples, ancient as well as new, can be found along the banks of the Ganges in Rishikesh. Shatrughna Mandir, Bharat Mandir, Lakshman Mandir are the ancient temples established by Adi Shankaracharya. Shatrughna Temple is located near Ram Jhula and Lakshman Mandir is near to Lakshman Jhula.