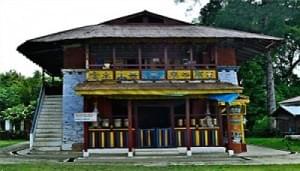 Gallery
Home explore from - to - Rinchenpong

Rinchenpong is a town in West Sikkim, India. It is situated in West Sikkim, about 40 km west of Gangtok, 10 km due south of Gyalshing, close to the village of Kaluk. It sits at an altitude of 5576 feet (1,700m) above sea level amidst a heavily forested area. It is famous for the Rigsum Monastery and trekking routes.

Near the town is the site of a historical battle between the forces of the then Chogyal (King) of Sikkim and the invading British forces.

The Lepcha tribe’s men used a concoction of unidentified herbs to poison the only water source, a lake (local term: pokhri). As a result more than half of the British forces were wiped out which stopped the British invasion and resulted in an accord. The lake remains poisoned even to this day and is known as bikh-pokhri locally (poisoned lake).