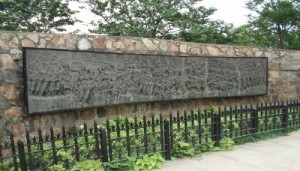 Gallery
Home explore from - to - Panipat

The city of Panipat, well known for the battles of Panipat, is a significant historic city of Panipat District in the state of Haryana.  Panipat is famous in India with the name of “City of Weaver” due to the presence of numerous factories and weaving looms making handlooms like blankets and carpets.

Panipat is the birthplace of the famous Urdu Shayar ‘Maulana Hali.’ The battle of Panipat has been significant with the name of this city. Panipat is also one of the five legendary cities that were found by the Pandava brothers, due to which it came to be known as Panduprastha. Three pivotal battles have been fought on the land of Panipat.

Along with being a significant historic destination of India, Panipat is also the biggest centre of Shoddy Yarn in the world. Its Samalkha subdivision is also famous as a Foundry of Agricultural instruments. The district also has heavy industry due to the presence of Indian Oil Corporation, National Thermal Power Corporation Power Plant and National Fertilizers Plant.


Panipat also has some significant tourist destinations like Hemu Samadhi-Sthal, grave of Ibrahim Lodhi, Kabuli Bagh, Devi Mandir, Salar Gunj Gate as well as the famous Tomb of Bu Ali Shah Qalandar. The city of Panipat is well connected with other major cities of India through highways, railways, and flights.