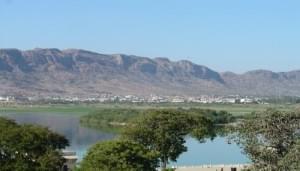 Gallery
Home explore from - to - Nasirabad

The city is known for its Army population. Many soldiers and officers are posted here every year. Also, this is the second station in Rajputana, after Beawer, where missionary work started in 1860's during the epidemic of Plague.

Nasirabad is known as a chhavani in Ajmer.

This city has a significance for the Indian Army. Nasirabad Cantonment has one of the biggest firing range in India. The army has almost surrounded this town. As far as the security is concerned this is one of the safest place available in Rajasthan due to the presence of the Indian Army.

People from different states of India have been interacting with the local population. The Indian army again plays an important role in this activity. This is one of the most famous place in Rajasthan where the 1857 revolt erupted. This was the place which represented Rajasthan in this mutiny