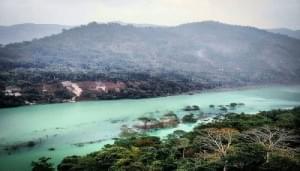 Gallery
Home explore from - to - Melli

Melli (also spelled Malli) is a town on the West Bengal-Sikkim border near the River Teesta.

Melli in the Nepali language means "the place where the dead are cremated".

Melli is one of the few towns in India that lies in two different states. The Jawaharlal Nehru Bridge connects the two parts of the town. It is the longest bridge in Sikkim. The part of the town in West Bengal is also called as Melli Bazaar.

The town lies on National Highway 31A connecting Siliguri to Gangtok. Melli is the main entry point for West and South Sikkim districts. Kalimpong town lies 20 kilometers away from Melli.

The town lies at an elevation of about 100 meters. It is located 7 kilometers upstream from Teesta Bazaar. On the Sikkim side lays Yuksom Breweries which produces most of the beer in the region. The brewery and a biscuit factory are the major industries in the region. River rafting can also be undertaken from this point