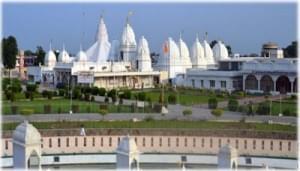 Gallery
Home explore from - to - Meerut

Meerut ,is an ancient city with settlements dating back to the Indus Valley Civilization having been found in and around the area. The city lies 70 km  northeast of the national capital New Delhi.

The city may have derived its name from 'Mayarashtra' the capital of the kingdom of Mayasura.This name may have mutated to Mairashtra, Mai-dant-ka-khera, Mairaath and eventually Meerut. According to another version, Maya(sura), being a distinguished architect, received from King Yudhishthira the land on which the city of Meerut now stands and he called this place Mayarashtra, a name which in the course of time became shortened to Meerut.

Every year, after the festival of Holi, a fair is conducted in Nauchandi grounds. There is a templeand a mosque facing each other, hence, this fair represents the unity of the Hindus and the Muslims.