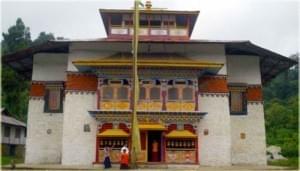 Gallery
Home explore from - to - Mangan

Mangan is a town and the headquarters of North Sikkim district in the Indian State of Sikkim. The town is connected to the capital Gangtok by a metallic road. North Sikkim is the largest district of Sikkim in terms of area. The town lies in the geographic south of the district. After the opening up of the district, Mangan has witnessed a spurt in its economy, mostly due to tourism.

The town opens up the Tibetan Plateau. Mangan also serves the towns of Lachung, Chungthang and Lachen in the far north. Owing to its elevation, the town enjoys a temperate climate.

Being the headquarters of the North Sikkim District, Mangan enjoys all the political and legal influence over the region. Another interesting fact about Mangan is that it certainly boasts of numerous tourist attractions and excursions in and around the town. Mangan also has its own market that to check out the curios and souvenirs.