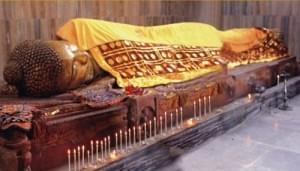 Gallery
Home explore from - to - Kushinagar

Kushinagar, Kusinagar or Kusinara is a town and a nagar panchayat in the Kushinagar district , located around NH-28 and is 52 km east of Gorakhpur city.

It is an important Buddhist pilgrimage site, where Buddhists believe Gautama Buddha attained Parinirvana after his death. Outside India, it is an International Buddhist Pilgrimage Centre. The followers of Buddhism, especially from Asian Countries, wish to visit this place at least once in their lifetime.

According to one theory, Kushwati was capital of Kosala Kingdom and it was built by King Kush, son of Rama, protagonist of the epic Ramayana. While according to Buddhist tradition Kushawati was named prior to the king Kush. The naming of Kushwati is believed to be due to abundance of Kush grass found in this region

The present Kushinagar is identified with Kushawati(in pre-Buddha period) and Kushinara(in Buddha period). Kushinara was the capital of Mallas which was one of the sixteen mahajanpads of the 6th Century B.C. Since then, it remained an integral part of the erstwhile empires .