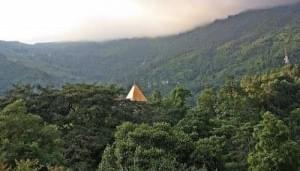 Gallery
Home explore from - to - Kurseong

Kurseong Kurseong is a hill station in the Darjeeling district in West Bengal.

The word Kurseong came from a Lepcha word ‘Kharsang’ which means ‘Land of the White Orchids’. The name was given by a European researcher who was researching on an exotic variety of white orchid which could only be found at Kurseong.

Kurseong is also known as the Land of Glorious Sunsets as the sunset viewed at Kurseong is visible through a mix of crimos & yellow & red color of clouds which eventually turns dark as the sun sets in the hills.

Kurseong is the right place for adventure lovers as it offers the best & exotic treks & hikes of West Bengal. You can hike through the lush greenery of Cryptomaria Japonica forest or take a village walk or it might be a tea garden walk.

Now Hot Air Balloon & Rock Climbing also added in the bucket list of adventure sports in Kurseong. Tourists can also visit Salamander Lake which is located 14 Km. from Kurseong which was a favorite place for British people for boating.

It is a beautiful lake that shelters the rarest & most endangered species of Salamanders which are under threat of extinction. Adventure seekers can also White Water Rafting in the river Tista which is graded at IV on an international scale & the series of rapids & varying intensity and character of Tista makes rafting more challenging for the adventure enthusiasts.

It is a very good place to relax & spend some time with friends or family.

Tourists can also have a mesmerizing view of the surrounding hills, mountains, hamlets & slopes from the Eagle’s Craig View Point which is at a short walking distance from the Kurseong Railway Station. If they are fond of tea, they should surely visit Makaibari Tea Estate there. Kurseong is home of the most costliest teas in the world.

Makaibari, Castleton & Ambotia Tea Gardens produce the best aromas of all black teas known to everyone. Makaibari also provides homestay which offers tourists to enjoy the experience of watching the process of transforming tea leaves into drinkable tea.

There are also some heritage churches like St. Andrew’s Church & St. Paul’s Church in Kurseong.

If you want to reach Kurseong by flight, the nearest airport to Kuseong is Bagdogra. There are direct flight connections with Delhi, Kolkata, Howrah, Guwahati, and other major cities of India.

There are various modes of transport available to reach Kurseong.