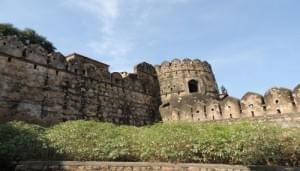 Gallery
Home explore from - to - Jhansi

Jhansi is a historic city in Uttar pradesh. It lies in Bundelkhand region on the banks of the Pahuj river. Jhansi , called the Gateway to Bundelkhand, is situated between the rivers Pahuj and Betwa at an average elevation of 285 metres.

The original walled city grew around its stone fort which crowns a neighbouring rock. The ancient name of the city was Balwantnagar.

From 1817 to 1854, Jhansi was the capital of the princely state of Jhansi which was ruled by Maratha rajas.Rani LakhsmiBai ruled it from June 1857 to June 1858.

According to a legend the, Raja of Orchha was sitting on the roof of his palace with his friend, the Raja of Jaitpur, and asked the latter whether he could discern this new fort that he had built on Bangara hill, and he replied that he could see it 'jhainsi' (meaning rather indistinct). This name 'Jhainsi' in course of time became corrupted to 'Jhansi'.

It was one of the most strategically situated forts of central India being built on an elevated rock rising out of the plain and commanding the city and the surrounding country.