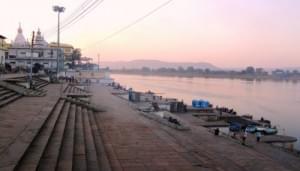 Gallery
Home explore from - to - Hoshangabad

The city is named after ruler of Narmadapuram, Hoshang Shah. The city was earlier called Narmadapuram after the Narmada River. Later the name was changed to Hoshangabad after Hoshang Shah, the first ruler of Malwa.

Hoshangabad district was part of the Nerbudda (Narmada) Division of the Central Provinces and Berar, which became the state of Madhya Bharat (later Madhya Pradesh) after India's independence in 1947.

The city is famous for its beautiful ghats along the banks of the Narmada river, Sethani ghat is a major attraction. There are colourful celebrations in the city on Narmada Jayanti. During celebrations this year the CM announced the efforts to rename the town. A Satsang Bhavan on the ghat has regular visits by Hindu saints who hold regular religious discourses on Ramcharitmanas and Geeta.