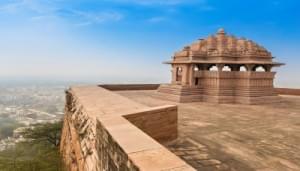 Gallery
Home explore from - to - Gwalior

Gwalior is known as the tourist capital of Madhya Pradesh. After being founded by Maharaj Suraj Sen, Gwalior Fort saw many different rulers ruling the city and suburbs around it. Gwalior became a prominent place for religious practices, cultures and other disciplines coming up during that time in the country. During 6th century BC Gwalior was ruled by the Naad dynasty of Pataliputra.

The ancient capital of Gwalior is steeped in the splendor of its past. A multitude of reigning dynasties,of the great Rajput clans of the Pratiharas, Kachwahas and Tomars have left indelible etching of their rule in this city of palaces, temples and monuments. The magnificent mementos of a glorious past have been preserved with care, giving Gwalior a unique and timeless appeal.

Between the months of October to March.