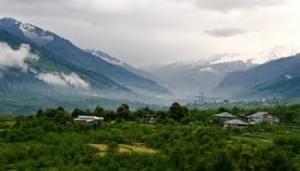 Gallery
Home explore from - to - Dharamshala

Dharamshala, formerly known as Bhagsu, is a city and a municipal council in Himachal Pradesh.

Dharamshala is a Hindi word, which loosely translates to “spiritual dwelling”.  In common Hindi usage, the word dharamshala refers to a shelter or rest house for spiritual pilgrims. Traditionally, such dharamshalas (pilgrims' rest houses) were commonly constructed near pilgrimage destinations (often in remote areas) to give visitors a place to sleep for the night. When the first permanent settlement was created in the place now called Dharamshala, there was one such pilgrims' rest house on the site, and the settlement took its name from that dharamshala.

The Dalai Lama's residence in McleodGanj and the headquarters of Central Tibetian Admininstration (the Tibetan government in exile) are in Dharamshala.

In the year 1960, Dharamshala became a temporary headquarters to the Noble Laureate His Holiness the 'Dalai Lama'. Now, Dharamshala is internationally acclaimed as ‘The Little Lhasa in India’. With a number of Tibetan settlements and the residence of the 'Dalai Lama', Dharamshala has truly become ‘the land of the lamas’.

September to October and again from March to June.

The summer months are best suited for activities like sightseeing and trekking. Another good time to visit is during the festival of Drukpa Teshi, which is held in August/September.