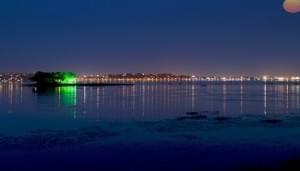 Gallery
Home explore from - to - Bhopal

Bhopal, the capital of Madhya Pradesh, is a fascinating amalgam of scenic beauty, old historic city and modern urban planning. It is the 11th century city Bhojpal, founded by Raja Bhoj, but the present city was established by an Afghan soldier, Dost Mohammed (1707-1740). His descendants build Bhopal into a beautiful city.

The two lakes of Bhopal still dominate the city, and are indeed its nucleus. Bordered along their shores stand silent sentinels that testify to the growth of the city.  Bhopal today presents a multi-faceted profile;the old city with its marketplaces and fine old mosques and palaces still bears the aristocratic imprint of its former rulers.

Equally impressive is the new city with its verdant, exquisitely laid out parks and gardens, broad avenues and streamlined modern edifices.  It is greener and cleaner than most cities in the country.

The climate is moderate in Bhopal. The summers are hot and winters cold. But it does not face extreme weather conditions.It rains moderately during rainy season.The weather is pleasant through out the year.