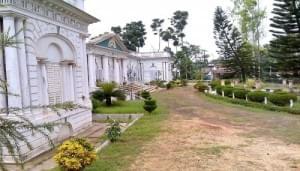 Gallery
Home explore from - to - Baharampur

Many buildings of the late 1600s can still be seen in Baharampur. A distinguished type of metal known as “Khagrai Kansha”, used in making bells comes from this city. Berhampore is also recognized for special type of sweets, "Chenabora", “Manohara”, and “Khaja”.

The place was also known as “Golden Bengal" by the Britishers. The stylish arts of the region are very popular among the tourists. Berhampore is also very popular for the handmade carpets, baskets and the miniature painting made up of jute takes one by surprise. The major industries situated here include ivory carving, rice and oil-seed milling, silk weaving and precious metal working.

The best season to visit Berhampore is the winter season. The temperature remains comfortable and is apt for visiting the monuments and other places of interest in Berhampore. The best months to visit are October- March.