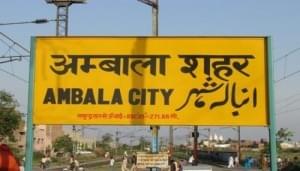 Gallery
Home explore from - to - Ambala

Ambala is positioned close to the Punjab border and has a sturdy presence of both the Indian Air Force and the Indian Army. Ambala is a significant travel center for several tourists who visit Punjab, Himachal Pradesh and Jammu and Kashmir.

It is said that Ambala District was founded by Amba Rajput during the 14th century AD. Another version is that the name is a corruption of Amba Wala meaning the mango-village, from mango groves which existed in its immediate neighborhood. Still, another version is that the District has taken its name after goddess "Bhawani Amba" whose Temple still exists in Ambala city.

The memorial placed at the Ambala Airport is devoted to the brave soldiers who lost their lives in war. There are several important religious sites that are situated in and around the city. These include both Sikh as well as Hindu sacred places. There are three most important Gurudwaras that are situated in the city and these are the Manji Sahib Gurudwara, Sis Ganj Gurudwara and Badshahi Bag Gurudwara. These are related with the three main gurus of Sikh religion.

Many changes have been made to the boundaries of Ambala district from time to time, and at present, it includes Ambala, Jagadhri, Saphera, Pipli, Mohali, Kharar, Ropar and Nalagarh. Kalka-cum-Kurari State, Manimajra, Pinjore, Kasauli and Sanawar.