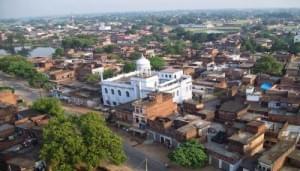 Gallery
Home explore from - to - Mau

Mau, now known as Maunath Bhanjan, located nearly 120 km from Varanasi on the banks of Tamsa. It is a major centre of textile weavers. Tamsa river flows through the city.

In the 1960s it was the biggest supplier of a plant called plash.

Many myths are popular regarding the history of Mau district. The word 'Mau' means 'padaav' or 'chhavani' in Turkish language i.e. barrack. The city was used as barracks by many rulers since long ago.  There is a mosque, built by Aurangzaib's sister Jahan Aara Beghum, the shahi mosque attached with a number of barracks (can be seen still now) in mohalla keyari tola.