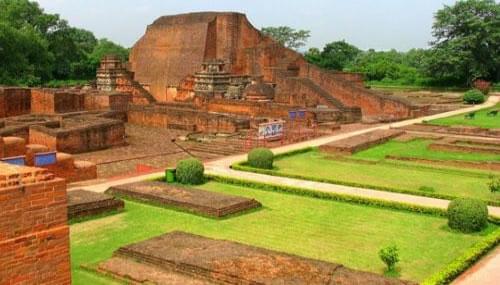 Gallery
Home explore from - to - Nalanda

Nalanda, an ancient centre for higher learning, is located around 55 miles south east of Patna in the state of Bihar.

Nalanda is considered as one of the oldest and great universities in the world. It was established in the 5th century, and the university flourished under many rulers since that era. The destination is visited mostly for seeing its Buddhist sites and monuments. The history of Nalanda dates back to the time of Lord Buddha and Mahavir.

The place was named after the terms ‘Nalam’ meaning ‘Lotus’ and ‘da’ that means ‘to give’. Nalanda is also known as the birth place of a follower of Lord Buddha, named Sariputra. Lord Buddha is believed to have visited this place several times during his lifetime.

There are many important sites in Nalanda that attract many historians, pilgrims and architects from all over the world. The head quarter of knowledge and learning, Nalanda is renowned for a culture and tradition in ancient India.

The ruins of Nalanda, which was once the great Nalanda University, are spread over an area of 14 hectares. The university used to house 10000 students and 2000 teachers and had dormitories for students according to their status. Somewhere among the ruins, there are also structures like stupas, monasteries, temples, chaityas, etc.