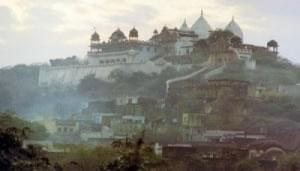 Gallery
Home explore from - to - Vindhyachal

Vindhyachal city is a Hindu pilgrimage site having the temple of Vindhyavasini. The detailed description has been given in 'Durga Saptashati' Chapter of Markandeya Purana. The river Ganga flows through this city. The Indian Standard Time (IST) line passes through the Vindhyachal railway station.

Mythologically goddess Vindhyavasini is believed to be the instant bestower of benediction.

It is one of the most reveredShaktipeeths of the presiding deity, Vindhyavasini Devi. The temple is visited by large number of people daily. Big congregations are held during Navratras in April and October months. Kajali competitions are held in the month of June. The temple is situated just 2 km from the Kali Khoh.