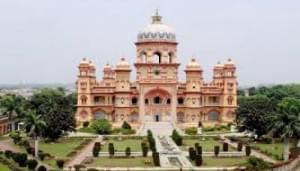 Gallery
Home explore from - to - Rampur

Rampur was formerly known for its various industries, including sugar refining and cotton milling. Its library has more than 12,000 rare manuscripts and a fine collection of Mughal miniature paintings.

It is the administrative headquarters of Rampur district. According to the government of India, Rampur district is one of several Muslim majority districts.Rampur is considered as third school of poetry after Delhi and Lucknow. Many prominent and legendary URDU poets of the time like 'Dagh', 'Ghalib' and 'Ameer Minaee' joined the patronage of Rampur court. Nawabs of Rampur were very fond of poetry and other fine arts.

They provided remunerations to the poets who were associated with ' darbar.' Nizam Rampuri earned great name as poet. In addition, Shad Aarifi was another famous poet from Rampur who evolved modern ghazal in a very distinct style.

Rampur was traditionally famous for the knives known as Rampuri Chaaku, which even made their way to Bollywood crime thrillers in the 1960s and 1970s. Rampuri cuisine, a part of the Mughal cuisine tradition, developed by the chefs of the Nawabs, is also known for its distinct flavours and dishes with recipes passed on from the royal kitchen, like Rampuri fish,Rampuri Korma, Rampuri mutton kebabs, doodhiya biryani and adrak ka halwa