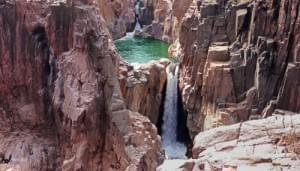 Gallery
Home explore from - to - Panna

Panna was a Gond settlement until the 13th century. When the Gondi were defeated by the Chandelas they migrated to other parts of Madhya Pradesh. Until that date, there were many rulers of the area.

The erstwhile capital of the Bundela Kingdom. is famous for Panna National Park. Panna town is the hub of many religious monuments, which showcases the architectural marvels of Hindu and Islamic styles. Adorned with greenish meadows dotted with evergreen trees, undulating forests , hills and rocks, Panna serves as a perfect place for Holiday tours and quite sojourn.

The famous mandir of Padmavatipuri Dham, adorned with divine lustre, is located in Panna town at the centre of Vindhyachal. The itinerant sage Mahamati Prannath and his disciples reached Panna with a divine message of awakening one's soul. Seeing a desert island, he decided to unfurl the flag of Jagani there. He helped the king Chhatrasal and adorned him with the title of Maharaja. He remained there for eleven years, and took samadhi inside the dome. The place, therefore, is known as the seat of salvation or Padmavatipuri Dham.