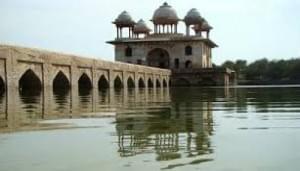 Gallery
Home explore from - to - Narnaul

Narnaul is one of the few districts in India with a name different from the district of which it is the headquarters. It is situated 140 kilometres south-west of Delhi and is well connected by both road and rail network.

Narnaul is a town with long history. There's been a mention of Narnaul in ancient texts as well,however not much of ancient history has been documented. In the beginning, the town was controlled by Jogis. Till the conquest ofMohammedan, Rathor Rajputs ruled the town and the adjoining areas.Buses depart from the main bus interchange junction in Narnaul to these and other cities of Haryana & Rajasthan.

Narnaul dates back to the Mahabharata era as Nar Rashtra according to legend. Another legend puts it to be about 900 years old where lions roamed free in the jungles surrounding the town. These lions gave the town the name Naharnaul (Fear of Lions). According to yet another legend, Raja Launkaran named it Narlaun after his wife.

Dhosi is a hill regarded as being holy by the inhabitants of the village of Kultajpur 8 km away from Narnaul. The famous "Chavanprash" was invented on this hill by Rishi (Sage) Chavan in ancient times