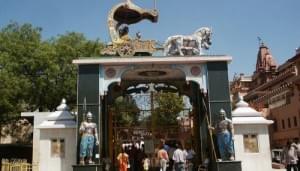 Gallery
Home explore from - to - Mathura

Mathura  is a city in Uttar Pradesh. It is located approximately 50 kilometres north of Agra, during ancient period, Mathura was an economic hub, located at the junction of important caravan routes.

Mathura is the birthplace of Krishna at the centre of Braj or Brij-bhoomi, called Shri Krishna Janma-Bhoomi, literally: 'Lord Krishna's birthplace'.It is one of the seven cities (Saptpuri) considered holy by Hindus. The Keshav Dev Temple was built in ancient times on the site of Krishna's birthplace . Mathura was the capital of the Surasena Kingdom, ruled by Kansa the maternal uncle of Krishna.

According to the Archaelogical Survey of India plaque at the Mathura Museum, the city is mentioned in the oldest Indian epic, Ramayana.  Afterwards, the place came to be known as Madhuvan as it was thickly wooded, then Madhupura and later Mathura.