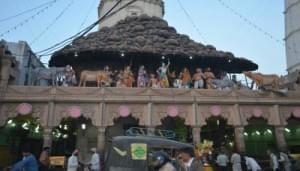 Gallery
Home explore from - to - Govardhan

Govardhana is a 8km long hill located near the town of Vrindavana, in the Mathura district. It is considered sacred specially in the Vaishnava traditions within Hinduism, known as Govardhan or Giriraj it is the sacred center of Braj and is identified as a natural form of Krishna.

Thus,It is believed that by residing in the foothills of Govardhan Hill, all the senses and the respective duties of a soul attain divinity and are more inclined to perform service to Krishna.

Govardhan Puja is celebrated the day after Diwali. It is the day Lord Krishna defeated Indra, the deity of thunder and rain.