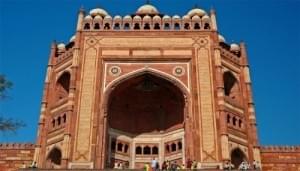 Fatehpur Sikri ,previously the city's name was Vijaypur Sikari, of the Sikarwar Rajput clan; the later city was founded in 1569 by Emperor Akbar, and served as the capital of the Mughal Empire from 1571 to 1585.

Here he commenced the construction of a planned walled city, which took the next fifteen years in planning, and construction of a series of royal palaces, harem, courts, a mosque, private quarters and other utility buildings. He named the city Fatehabad, with Fateh, a word of Arabic origin in Persian, meaning "victorious." It was later called Fatehpur Sikri.

It is at Fatehpur Sikri that the legends of Akbar and his famed courtiers, the nine jewels or Navratnas, were born. Fatehpur Sikri is one of the best preserved collections of Indian Mughal Architecture in India.

Fatehpur Sikri sits on rocky ridge, 3 kilometres in length and 1 km  wide and palace city is surrounded by a 6 km wall on three sides with the fourth bordered by a lake. Its architects were Tuhir Das and Dhruv Chawla and was constructed using Indian principles. The buildings of Fatehpur Sikri show a synthesis of various regional schools of architectural craftsmanship such as Gujarat and Bengal. This was because indigenous craftsmen were used for the construction of the buildings.

Influences from Hindu and Jain architecture are seen hand in hand with Islamic elements.