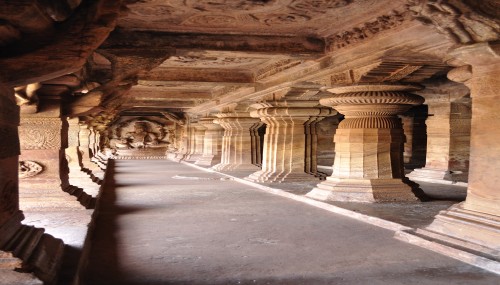 Gallery
Home explore from - to - Badami

Badami is a small town located in Karnataka. It is known for rock sculpture and temple architecture. The town was originally known as Vatapi and was the seat of government of the Badami Chalukyas in the 6th century AD. The name Vatapi has its origins in a mythological tale of the Ramayana.

According to mythology, Vatapi and Ilvala were two demons. They used to eat beggars alive by tricking them. Vatapi would pose as red meat which Ilvala then offered to the beggars. Before the beggars could digest the meat, Ilavala would call out Vatapi’s name and he would rip through the beggars’ body.

Ilvala had a boon of calling back people from anywhere by just calling out their name. However, once, Sage Agastya ate and digested Vatapi before his elder brother could call out his name. Thus, Vatapi’s life was brought to an end.

Badami houses historical monuments which are very well preserved. A few tourist places of interest in Badami include the Badami Fort, a Buddhist Cave, an archaeological museum and a series of four cave temples built by the Chalukyas. Badami is also known for its high stone cliffs, which find favour among the sports enthusiasts.