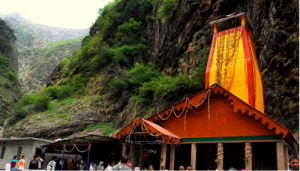 Gallery
Home explore from - to - Yamunotri

Situated amidst the Garhwal Himalayas, Yamunotri in the state of Uttarakhand is naturally bestowed with abundant beauty and charm. At a hovering altitude of 3293 meters, Yamunotri lies adjacent to the Indo-Chinese border and is encircled by the lofty peaks on all sides. One of the holiest centers in the Hindu pantheon, this sacred abode of the Asti muni boast of so many unparallel vistas of nature.
Highly revered as the origin of the majestic River Yamuna, Yamunotri is famed for its glaciers, and thermal springs that makes it one of the most important stopovers in the schedule of a Hindu pilgrim. According to Hindu tradition, Yamuna is the sister of Yama, the god of death and a holy dip in this river secures a painless death to the devotee.

A thrilling and exhilarating location in the footsteps of Garhwal mountain ranges, Yamunotri proffers picturesque surroundings with the awesome shrubs, lush meadows.