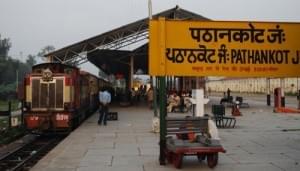 Gallery
Home explore from - to - Pathankot

Pathankot situated in the foothills of Kangra and Dalhousie, with the river Chakki flowing close by, the city is often used as a rest-stop before heading into the mountains of Jammu and Kashmir, Dalhousie, Chamba, and Kangra, deep into the HImalayas.

Numerous coins of great antiquity found at Pathankot prove that it is one of the oldest sites in the Punjab and it must always have been a place of great significance as it is situated in the foot of the hills.

The big moment of Pathankot came on 8 November 2014 when Punjab Deputy CM Sukhbir Singh Badal laid down the foundation stone for a stadium in Pathankot. Ranjit Sagar Dam is the highest Gravity in Asia. Another place of interest could be Keshopur Chhamb which is home to many Migratory Birds.