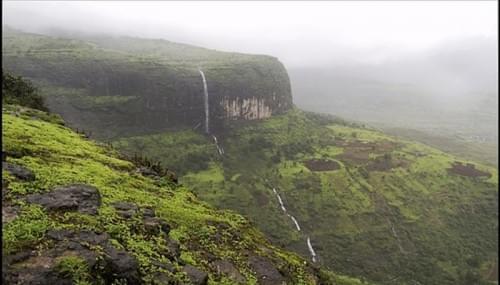 Gallery
Home explore from - to - Nashik

Nashik is an ancient city in Maharashtra. This city is also known by the names – “Religious Capital of Maharashtra”, “Wine capital of India” and “France of India”.

Nashik has a very rich importance mythologically, historically, culturally, and socially. Nashik was known by different names in different ‘Yugas’. The current name is derived from the epic of Ramayan, wherein Laxman had cut off Surpanakha’s nose (naak/nashika). It is said that during the 14 years of exile of Lord Rama, he made Nashik as his abode.

The Panchavati area (today located in the heart of the city) is believed to be the place where Lord Rama along with Goddess Sita and Laxman stayed here and from this place, Ravana had abducted Sita.

Nashik is located in the northern part of the Maharashtra state. It lies on the banks of river Godavari, which originates 24 km away from the city in the Brahmagiri mountains, Triambakeshwar.

Nashik is a well known Hindu pilgrimage site, as it is one of the four cities to host the Sinhastha Kumbh Mela.

Nashik is very well connected by roadways and railways. Nashik also has a domestic airport that connects a few cities in India.

The currency note press and the Indian security press is also located in Nashik. A number of large manufacturing companies have their plant in Nashik (Atlas Copco, Hindustan Unilever, coco-cola, Crompton, etc).

The “Yeola paithani” that has got a GI tag is produced in Yeola in Nashik district. The climate in Nashik is ideal for the manufacturing of grapes, thus housing half of India’s wineries.

The climate in Nashik is mild throughout the year. One can visit Nashik all round the year except for the month of May.

The people in Nashik respect and thrive to protect what they have – cultural richness. Nashik warmly hosts the Kumbh Mela and has been trying to develop the place to provide better facilities to all the pilgrims who travel here.

Nashik has also contributed some great freedom fighters, poets, theatre artists, and actors. The city of Nashik is a perfect melange of culture, heritage, adventure, and a touch of modernity. The most popular religious places in Nashik are Triambakeshwar (one of the 12 jyotirlingas and the origin of Godavari river), Anjaneri hills (believed to be the birthplace of Hanuman), Statue of Ahimsa at Mangi tungi (Tallest Jain idol mentioned in Guinness book of world records – the statue of Rishabdev), Pandav Leni (2nd-century Buddhist caves), Godavari ghat and the Panchvati and Sita gufa (place of the abduction of Sita).

The popular wineries are Yorkshire and Sula (known for the Sula Fest).

Other than these there are a number of beautiful trekking, hiking, and camping spots around Nashik like Bhandardhara, Ramshej fort, Salher – Mulher (twin forts), Tringalwadi fort, Harihar and the famous Alang, Madan and Kulang forts, Sandhan valley, etc. These places are a paradise for adventure lovers in Maharashtra.