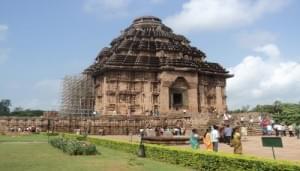 Gallery
Home explore from - to - Konark

Konark is a medium town in the Puri district in the state of Orissa, India. It lies on the coast by the Bay of Bengal, 65 kilometers from the capital of the state; Bhubaneswar. It is the site of the 13th-century Sun Temple, also known as the Black Pagoda, built in black granite during the reign of Narasimhadeva. The temple is a World Heritage Site. The temple is now mostly in ruins, and a collection of its sculptures is housed in the Sun Temple Museum, which is run by the Archaeological Survey of India. Konark is also home to an annual dance festival called Konark Dance Festival, held every December, devoted to classical Indian dance forms, including the traditional classical dance of Orissa, Odissi. The name Konârka is derived from the Sanskrit word Kona (meaning angle) and word Arka (meaning sun) in reference to the temple which was dedicated to the Sun god Surya. The Sun Temple was built in the 13th century and designed as a gigantic chariot of the Sun God, Surya, with twelve pairs of ornamented wheels pulled by seven horses. Some of the wheels are 3 meters wide. Only six of the seven horse still stand today.The temple fell into disuse after an envoy of Jahangir desecrated the temple in the early 17th century. The best time to visit the destination is from October to March.