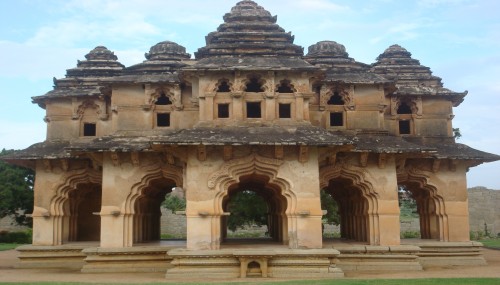 Gallery
Home explore from - to - Hospet

Hospet, a small township in Northern Karnataka, is located at a distance of 325 km from the capital city of Bangalore. Situated on the river banks of the Tungabhadra, the destination is 12 km away from Hampi, which is a World Heritage Site. The city is a gateway to tourists arriving from Goa and the West Coast. The destination also acts as a gateway to Hampi.

The city is spread over an area of 28.39 sq km, which was constructed by one of the rulers of Vijayanagar, Krishna Deva Raya. He built the city in memory of his mother, Nagalambika. Although, natives named the town as Hospet Pete, meaning New City.

Owing to the large iron ore and steel production in the city, it is also referred to as 'Steel City'. One of the highlights of the city is the Tungabhadra Dam, a reservoir built on the Tungabhadra River, which dates back to the 12th century. The ancient reservoir was built by the Vijayanagara king, Krishna Deva Raya.