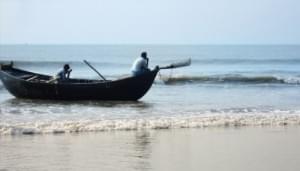 Gallery
Home explore from - to - Mandarmani

Mandarmani is a beach resort in Purba Medinipur district of South Bengal , one of the southern districts of West Bengal . It is almost 180km from Kolkata Airport on the Kolkata - Digha route.  Locally called Mandarboni, the village offers a tranquil atmosphere amidst which the travellers can unwind and loosen the grip. The beach at Mandarmani is the perfect spot to watch the sunrise; one can also enjoy water sports like surfing, jet skiing, banana boat rides, ATV bikes and bungee trampoline here. It is to be noted that several water sports are conducted during the Digha-Mandarmani Festival held here in the month of January every year. The festival also showcases performances by several music bands. Mandarmani boasts of a 13 km long motorable beach, probably the longest motorable beach road in India. For those of you who like to shop, the objects and ornaments made from seashells and oysters are available in plenty here.

Best time to visit is October to March.