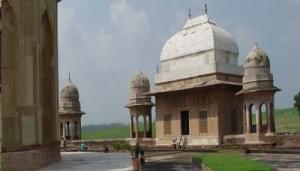 Gallery
Home explore from - to - Kurukshetra

The ancient land of Kurukshetra is the headquarters of the Kurukshetra District of Haryana State. A popular destination for pilgrimage it's legendary past is associated with the Vedas and Vedic culture holds a prominent place in the history of the Hindu religion and Hindu scriptures.

Known as the land of the epic Mahabharata and Bhagavad-Gita, Kurukshetra was known as Uttaravedi, Bhrahmadevi, Dharamkshetra (land of righteousness) and Brajhmakshetra (the field of Brahma) during different ages. Situated on the banks of the River Sarasvati and River Drishadvati, Kurukshetra was the battleground of the great Mahabharata War that took place between the Kouravas and the Pandavas.


Kurukshetra has become a popular place of attraction for historians, pilgrims and tourists alike. With its distinct religious and cultural predominance, Kurukshetra provides a deep insight in to the history of ancient India.