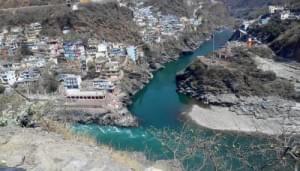 Gallery
Home explore from - to - Devprayag

Devprayag is a town and a nagar panchayat (municipality) in Tehri Garhwal district in the state of Uttarakhand, India, and is one of the Panch Prayag (five confluences) of Alaknanda River where Alaknanda and Bhagirathi rivers meet and take the name Ganga or Ganges River.
Traditionally, it is considered to be the place where sage Devasharma led his ascetic life, giving birth its present name, Devprayag. It is one of the five sacred confluences in the hills and is an important place of pilgrimage for devout Hindus.

"Devaprayaga" means "Godly Confluence" in Sanskrit. As per Hindu scriptures, Devaprayaga is the sacred event of merging two heavenly rivers, Alakananda and Bhagirathi, to form the holy Ganges.