Home » Regions » Ladakh » Why you should not miss Tso Moriri on your trip to Ladakh !! 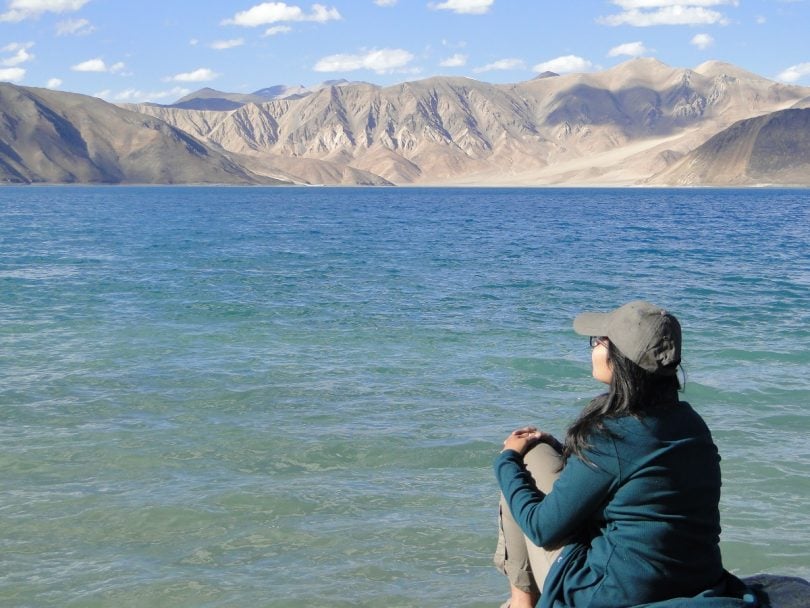 Ever since the inception of an adventurous soul especially amongst the bikers, Ladakh has seen an overflow of tourists. The remaining job was done by Bollywood blockbuster ‘3 Idiots’ post which no tourist attractions remained the same as they were used to be – Calm, Quaint, Serene.

One of the major attractions of Ladakh, the Pangong Lake, made it to every person’s list be it a solo traveler, a biker or someone traveling with their family. But the recent past has brought a lot of change to the lake, to its secluded atmosphere. Numerous cafes and homestays have deteriorated the beauty of the Pangong Lake to a certain level. And that’s what makes people look out for other options, options that are more offbeat, more untouched.

To answer this call of humans for an adrenaline rush, nature paved a new path to the Tso Moriri Lake. It is said that the journeys are more memorable than the destination itself but a visit to Tso Moriri will prove this wrong.

The adventurous, picturesque trail to the Tso Moriri Lake will be an experience in itself but the memories would be incomplete without the mesmerizing beauty of the lake.

Why Tso Moriri Lake? Well, the forthcoming lines will introduce you to Tso Moriri and all it has to host a gamut of travelers from adventurers and peace seekers to photographers and nature lovers.

Tso Moriri is for the thrill seeker

Visiting Tso Moriri can be made possible via three routes viz. Leh, Pangong, and Manali.

Though the Leh – Tso route via Chumathang is most preferable, for those heading towards Leh via Manali can take a short diversion and cover it first. Being at an altitude higher than Pangong Tso, the journey offers much more thrill and at par panoramic views.

Throughout the journey, you come across varied landscapes and somewhere midway the Indus River will join to make the tripping more scenic. As you approach Tso Moriri the journey turns into a paradise for off-roaders as you make your way out through the sandy and drift trails littered with stones.

It is a numinous feeling traversing through the fearful yet fascinating routes to reach one of the most quaint, most serene high altitude lakes.

Tso Moriri : For a photographic eye

Tagged as the highest Ramsar site in the world, the place is named as Tso Moriri Wetland Conservation reserve.  It is a paradise not only for wildlife photographers but also for those who prioritize capturing all through the god gifted lens left alone the gadgets.

The Tso Moriri attracts a broad range of wildlife including some rare to find migratory birds and marmots. Don’t be surprised if Tibetan wolves & wild ass pose for you on your wildlife photography tour.

Tso Moriri is for the soul seeker

In this fast globalizing world, people are stuck in between the daily traffic, pollution and the restless life. As tension brims out of our brains, we are on a lookout for a place where we can spend some time with our soul, some me time.

To make this possible one has to be at place that is purest in itself, that is not hampered by the humans but pampered by pristine surroundings. And Tso Moriri is one such place, a place untouched by the human interventions.

Every moment in the laps of Tso Moriri from reaching there to staying there is a test of your patience, decision making and on heading back home you are loaded with self-confidence. You take pride in yourself.

Every other turn is a test of your skills and you get to know yourself even better as you face those freaking yet fascinating moments. Yes, you read it right. You never know what you encounter the next moment and the way your mind and body responds to it will be a surprise for you too.

Imagine a place all for yourself, where you don’t have to look for a peaceful corner as the whole surrounding is so enchanting in itself. A place where you can spend hours with yourself and do nothing but just witness the changing moods of the lake. Suddenly a cool breeze swiftly caresses your hairs.

Tso Moriri is all this but at an escalated level. The lake changes its shades throughout the day and looks best on a calm day when the desolate brown peaks reflect in the blue lake. Sitting by the lake would take you away in a world of your own thoughts and you won’t even know as the time passes.

For the sake of facts

We all love to boast about witnessing the largest dam or passing through the longest dam and traversing on the highest motorable road. A visit to Tso Moriri gives you another chance for doing so.

Tripping to this spectacular lake will leave you with immense opportunities to boast about amongst your peers. It’s a drive on one of the deadliest and highest motorable road to land your feet on the largest high altitude lake of India at an altitude of 4522 m.

So what’s the wait for…throttle up the engine and get ready to travel into a whole new World.Welcome to Ladakh.